Perhaps you were told your cat has been spayed before she came to you. Perhaps you had her spayed yourself. Now she’s showing signs of pregnancy. You are confused and concerned. Can a cat get pregnant after being spayed? If not, what’s going on?

Can a cat get pregnant after being spayed?

During a traditional spay, the ovaries and uterus are removed. This is the most invasive sterilization procedure, and many experts today prefer other methods, because they have a lower risk of side effects.

If a traditional spay is performed correctly, it’s impossible for the cat to get pregnant. Pregnancy requires a uterus and at least one ovary.

An ovariectomy is another type of spay procedure. This method removes the ovaries, but leaves the uterus. Since the uterus and the ovaries are required to get pregnant, a cat can’t get pregnant without ovaries.

The major benefit to this procedure is that the surgery is a bit less complicated and risks are reduced. Recovery time is a little faster for this surgery. There’s a shorter time period of anesthesia, because the surgery takes less time.

It was once thought that it was necessary to remove the uterus to prevent diseases like uterine infections. However, once the ovaries are removed, the uterus begins to shrivel and shrink.

Essentially, the uterus becomes a dormant organ once the ovaries and their hormones are no longer present. When this occurs, there’s virtually no risk of uterine diseases.

Some vets or owners prefer to perform an ovary sparing spay. As the name suggests, this method leaves one or both ovaries in tact. Because the ovaries make hormones, removing them, particularly at a young age, can have negative consequences.

These hormones are important for growth and development, as well as fertility. There are some benefits of removing the ovaries, including eliminating the risk of ovarian cancer. Which procedure is best should be discussed with your veterinarian.

How Can A Cat Become Pregnant After a Spay?

If your cat is pregnant after a spay, there are a few possibilities. The first, assuming the spay surgery was completed, is that it wasn’t performed correctly. If the uterus wasn’t removed, she can become pregnant  if she still has one ovary.

The other possibility is that she wasn’t spayed. The cat’s previous owner could lie about having the procedure done. If she was adopted from a shelter, it may simply be an oversight. Shelters perform numerous spays every day, and once in awhile a cat slips through the cracks.

It’s also possible that your cat is having a false pregnancy. False pregnancies are rare after a spay, because they are believed to be related to hormonal imbalances. If the ovaries are removed, it should eliminate false pregnancy as well.

If the ovaries are intact, either by design or mistake, a false pregnancy is possible.

What to Do If I Think My Cat is Pregnant After Spay?

If your cat is showing signs of pregnancy after spay, you should visit your vet. It’s important to know if your cat is pregnant. If they are, you’ll need to know why they are pregnant.

If they aren’t pregnant, it’s just as important to know why they are exhibiting pregnancy symptoms. False pregnancy is a common cause, but there are potential medical causes as well.

Do female cats still mate after being spayed?

Generally, a spayed cat will have no sexual desire if a traditional spay was performed. However, it can occur for a few reasons.

It’s All In the Ovaries

In most cases, if a cat is sexually active after spaying, it’s because she still has her ovaries. If an ovary sparing spay was performed, you can expect your cat to still have her sexual desire, but not be able to get pregnant. It’s safe sex for cats!

If a traditional spay was performed, ovarian remnant syndrome is likely the culprit. This occurs when ovarian tissue is left behind. This can occur because the ovaries were not removed.

It can also occur during a successful surgery, however. Ovarian tissue can lurk in the abdomen. After the ovaries are removed, this tissue activates to compensate for the missing ovaries. Just like the ovaries themselves, this tissue will produce the hormones that drive sexual desire.

Your female may still have sexual desire a few weeks after surgery, even if all ovarian tissue is removed. Once the ovaries are removed, no new hormones are produced. However, the hormones already in their body don’t just disappear.

They can remain active for up to 4 to 6 weeks after surgery. Once the hormones have left your cat’s body, the sexual desire should as well.

Yes, a spayed female can attract males, depending on the procedure performed. A female only attracts males when they are in heat or shortly before or after. When they are in heat, they release hormones that signal their sexual fertility.

Males can smell these hormones from miles away.

If a successful traditional spay was performed, the female may attract males for a few weeks after the procedure. Once the hormones leave her body, she should stop attracting male cats.

If an ovariectomy is performed, the ovaries are removed. The uterus, however, remains. Since the uterus isn’t responsible for hormone production, she will no longer go into heat. As with a traditional spay, it’s possible for her to attract males for a short time after the surgery. Once the hormones leave her body, she will no longer be desirable to males.

If a female still has her ovaries, she will still go into heat. This will lead her to attract males as she would before the procedure. If an ovary sparing spay has occurred, she can’t get pregnant.

Because the ovaries produce hormones that cause her to go into heat, she will still have a heat cycle.

Does a cat still go into heat after being spayed?

You got your cat spayed, thinking that you’d never have to deal with another heat cycle. Now your cat seems to be in heat. What’s going on?

Just like attracting males, this depends on the procedure. Generally, a female with a traditional spay or ovariectomy will not go into heat. However, it can happen if tissue remains.

Ovarian remnant syndrome can cause your cat to go into heat. This can occur weeks, months, or even years after a successful traditional spay. This is because the ovarian tissue can activate at any time, causing the sex hormones to be released.

Ovarian remnant syndrome can be treated with another surgery. However, if you are comfortable with your cat’s hormonal behavior, doing so isn’t typically necessary.

As mentioned earlier, a cat with an ovarian sparing spay will continue to have heat cyles. Her hormones still function normally because she still has her ovaries. 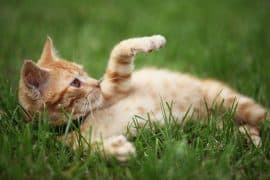